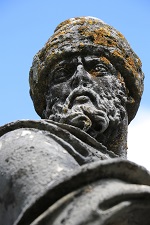 Rather than binge watch a new series, one night we chose an old favorite, the nineteen-fifty-two movie, Moulin Rouge. The famous real-life burlesque nightclub in Paris is equally famous to its customer, the painter, Henri de Toulouse-Lautrec. Henri is a post-impressionist painter among the likes of Van Gogh and Gauguin, who painted the dancers and singers he found in the bohemian subculture. He liked them better than the aristocratic circles he was born into because of his unconventional appearance.

Henri had a full-size torso but short legs, large head, shortened lower jaw, and large tongue. He also had fractures of the long bones and cranio-facial deformities. Henri had pycnodysostosis which wasnï¿½t diagnosed until a century later and thus carries his surname of Toulouse-Lautrec Syndrome.

Itï¿½s a rare hereditary disease from not having enough of the cathepsin K enzyme inside osteoclasts, which interferes with the cellï¿½s job of reabsorbing and reforming bone tissue. Disrupting this cycle results in fragile bones and too much buildup of dead bone material which is toxic.

Even so, Henri could have lived a normal lifespan except that he was alcoholic and had tuberculosis, and so he died at age thirty-seven. By the time he died, he had painted and sketched hundreds of works leaving us his contribution to art. But his life also brought awareness to a disease that had yet to be understood.

Henri de Toulouse-Lautrec and medicine: A triumph over infirmity
Renowned 19th century French painter Henri de Toulouse-Lautrecï¿½s most obvious association with medicine is through his bone disease. The condition from which he probably suffered was first described in 1954 by the French physician Robert Weissman-Netter. It was named pycnodysostosis in 1962 by Marateaux and Lamy and was soon attributed to this artist as the ï¿½Toulouse-Lautrec Syndrome.ï¿½ The retrospective diagnosis of his skeletal condition is highly probable but cannot be definitive, as no autopsy was done when he died, no x-rays were taken of his bones during life, and there has been no subsequent exhumation of his remains to allow post-mortem studies to be carried out...

Osteoclasts: What Do They Do and How Do They Do It?
As Americans live longer, degenerative skeletal diseases, such as osteoporosis, become increasingly prevalent. Regardless of cause, osteoporosis reflects a relative enhancement of osteoclast activity. Thus, this unique bone resorptive cell is a prominent therapeutic target. A number of key observations provide insights into the mechanisms by which precursors commit to the osteoclast phenotype and how the mature cell degrades bone...