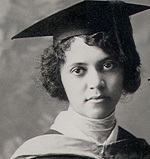 How many women scientists can you name? Maybe Marie Curie or Jane Goodall, but what about Alice Ball? No? Well, weï¿½ll tell you about her. Ball died at just age 24, but had already achieved much. She was the first African American and first woman to get a masterï¿½s degree in chemistry in nineteen-fifteen; the first female chemistry instructor at her college and department head, but her greatest achievement is in the treatment of leprosy.

Ball was pursuing her masterï¿½s degree at the College of Hawaii when the islands had a spate of leprosy cases. Dr. Henry Hollmann, at the Honolulu leprosarium, urged her to make the only treatment for leprosy more effective and tolerable.

Injection of the Chaulmoogra tree oil into affected skin helped ease symptoms but it was so viscous that it formed bulbous columns that wouldnï¿½t dissolve and caused abscesses. Ms. Ball found the answer. She was able to convert the fatty acids in the thick oil into ethyl esters that could be injected more easily.

The treatment was amazingly effective, but Ball died from inhaling toxic fumes in a lab accident before publishing her work. Her Masterï¿½s degree mentor, Arthur Dean, mass produced the ethyl esters with just a minor change and named the method after himself. But Dr. Holloman from the leprosarium publicly objected, noting that the ï¿½tweakï¿½ by Dean was not ï¿½any improvementï¿½ of Ballï¿½s method.

It still took ninety years for Ball to get credit but now her name is not only on a plaque at the college, Hawaii celebrates Alice Ball Day.

How the Woman Who Found a Leprosy Treatment Was Almost Lost to History
The daughter of daguerreotype pioneers, Alice Ball used her passion for chemistry to develop an injection that stayed in use for 20 years.

The Chemist Whose Work Was Stolen from Her
The Black scientist Alice Ball helped develop a treatment for leprosy in the early twentieth century. But someone else took the credit.

Alice Ball pioneered leprosy treatment and then had her work stolen
Short film The Ball Method tells the story of Alice Ball. She helped develop an effective treatment for leprosy, then a senior colleague claimed her work as his own giving her no credit