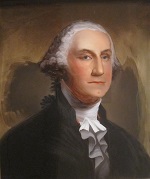 While many Americans can cite the myths told about our first president such as his nonexistent wooden dentures, most don't realize George Washington suffered in his last days.

On December ninth, seventeen ninety-nine, Washington stayed in wet clothes after working on his farm in the rain. Even though he woke up with a sore throat the next day, he went back outdoors to work. Later that evening, his sore throat kept him from reading to his wife and by dawn he had trouble breathing.

His doctor of forty years arrived to bleed him of half pint. A mixture of molasses, butter and vinegar was used to soothe his throat. But since he couldn't swallow it, he nearly suffocated. Then the doctor blistered his throat to balance his humors. At the time, doctors thought diseases were caused by isonomia, an imbalance in one of four humors: yellow bile, black bile, phlegm and blood. None of this helped.

They bled him again and gave him an enema to no effect. He was bled five times for a total of eighty ounces which was forty percent of his blood. By then, three doctors were treating Washington and after trying to induce vomiting without effect, he died at the age of sixty-seven.

Since then, theories explaining his death include croup, diphtheria, "septic sore throat" and pneumonia. But the closest explanation came about two decades ago: acute epiglottitis - when the cartilage lid that covers the windpipe swells, blocking air which can be fatal.

Washington's last words were, "Tis well", a man of courage to the end.

The mysterious death of George Washington
On December 14, 1799, George Washington died at his home after a brief illness and after losing about 40 percent of his blood. So what killed the 67-year-old former President?..

George Washington Myths
Few figures in American history are surrounded by more well-intended mythology than George Washington. Throughout much of his adult life, many sought to perfect the image of the Father of our Nation, and after his death, others sought to deify the man...

Dec. 14, 1799: The excruciating final hours of President George Washington
It was a house call no physician would relish. On Dec. 14, 1799, three doctors were summoned to Mount Vernon in Fairfax County, Va., to attend to a critically ill, 67-year-old man who happened to be known as "the father of our country"...